Watch your hands: how to recognize popular gestures

Watch your hands: how to recognize popular gestures

Hand movements, sharp or barely noticeable, can sometimes tell more about a person than words. Most often, we commit them unconsciously, but they give out our true intentions, mood and emotions. One who knows the meanings of typical gestures can “read” people like an open book.

Very few realize that unlimited power is concentrated in their hands. Hands can protect or betray, and this happens against our will. In that case, of course, if we do not understand sign language.

In many languages, the word “hands” is used not only to mean parts of the body. Think about how it sounds in Russian:

In most cultures, open palms express purity of intent. At all times, an oath raised or clasped to the heart meant an assurance of honesty and loyalty. Thais, Indonesians and Malays raise their clasped hands to their chests as a sign of greeting or gratitude. Some barely manage to lie on their backs with spread out palms. Gestures are an important part of body language, and understanding them is very interesting.

“I want to be believed”

When they accuse us undeservedly, we are indignant and say something like: “It’s not me!”, “I was not there!”, “What do I have to do with it?”. At such moments, the palms open and turn up to show that we have nothing to hide. Another person picks it up intuitively and believes that we are telling the truth.

Again, be careful if someone communicates something important while holding their hands in their pockets or behind their backs. Hidden palms are cause for doubt. Of course, there are exceptions, but the more tense the situation and the more serious the problem, the more likely it is that a person is lying or hiding part of the information.

Many women pretend to be busy trying to lie. For example, they take to cleaning and rearrange objects or are distracted by extraneous topics in order to “speak their teeth”.

Hands up, hands down

Hand movements during a conversation can significantly affect the relationship of the interlocutors. When you ask for something, turn your slightly open palms up, and your counterpart will read this gesture as “do a favor.” In this case, there is no feeling that he was disturbed, trying to put pressure or threaten. But if you repeat the same thing with your hands down, the request can be taken as an order.

When communicating in body language, cultural differences must be considered. For example, the classic Western “come here” gesture (the hand is extended forward with the palm up, you bend your fingers toward you) is considered humiliating in South Korea. To call someone, you need to turn the brush palm down.

A handshake not only sets the tone for a business or diplomatic meeting, but also affects its outcome. When two peers greet each other, their hands are arranged vertically and parallel, mirroring each other. But if one person spreads his hand palm up, it can be read as a sign of submission, recognition of supremacy and superiority.

Many successful businessmen and authoritarian politicians use the dominant handshake style. One way or another, their palm is on top, unless the interlocutor decides on hidden intentions and engages in a symbolic struggle for power. Then the hands will come together in an “equal” shake.

If you want to express someone’s disposition, keep your hands upright and don’t overdo it, squeezing your palm

What to do if someone imposes a struggle for primacy? Cover the opponent’s right hand with his left hand and grab his hand in the glove. This will stop his attempt to demonstrate who is in charge, but at the same time it can cause irritation, so use this technique only if absolutely necessary.

It should be noted that shaking with two hands does not always carry a negative connotation. If a close friend does this, it means sincerity and warmth, as if hugging. In many Arab countries, a local resident can greet a stranger with this gesture without any second thought. Meeting his friend’s friend, he covers his brush with both hands, as if to say: “You are my friend too, I trust you.”

You can write a separate article about handshake styles, but if you want to express someone a friendly disposition, keep your hands upright and don’t overdo it, squeezing someone else’s hand. 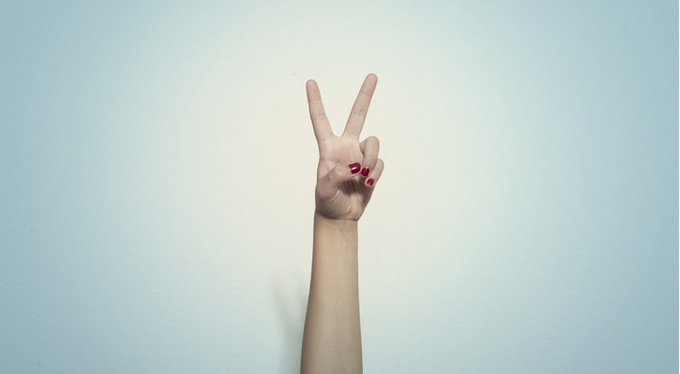 In most cultures, rubbing hand in hand expresses excitement and the expectation of something good (or the person is just cold). Speed ​​of movement gives out the level of impatience or the desire to bring a joyful event closer.

Rubbing the thumb on the index finger is usually associated with money, as if we demand: “Drive a coin!” However, despite the wide distribution, this gesture is considered indecent. Those connected but still fingers in South Korea will be read as “take my heart,” that is, they will be accepted as a declaration of love.

Folded or clasped hands transmit different messages depending on the situation. This may mean the desire to emphasize their strength or – confidence and even nervousness. Body language experts Alan and Barbara Pease, who wrote 15 books on non-verbal communication, noted an interesting detail: the height at which the hands are located expresses a degree of doubt.

If a seated person holds tightly clenched hands with entwined fingers at face level, there is probably an internal struggle in it. Offer him a drink or ask him to hold any item so that he opens his hands. Then the arguments will be received much more favorably.

Hands house (closed fingers form an inverted “V”) give power and self-confidence. Although this gesture is very characteristic of superiors, it does not always mean the desire to dominate. People who use it often feel competent and confident and know well what they are doing.

The way to walk or stand with hands folded behind your back helps you to look authoritative and control your feelings. Use this gesture in stressful situations to keep calm. On the other hand, hands hidden behind the back can cause distrust. Therefore, try to keep them in sight if you want your words to be believed.

Money: our gestures give us away

The way you handle money can tell a lot about their owner. We carefully smooth the bills or crumple them into a lump, hold them in our wallet or shove our pockets carelessly … Psychoanalysts Andrei Rossokhin and Samuel Lepastier talk about the intricacies of our contacts with money.

Many generations grew up on a fairy tale about a poor girl and a crystal shoe, which became a pass to royal life. However, the story is not as straightforward as many are used to thinking. Cinderella must certainly turn into a stepmother’s daughter …

KNOW YOURSELF
Infidelity: what we are willing to forgive and what we are not
Questions of infidelity have attracted the attention
0 56

KNOW YOURSELF
how to eat safely for nature
Everything in the world is interconnected, and the
0 16

KNOW YOURSELF
how to keep a family after the birth of a child?
Moreover, unlike a woman, for whom there are many techniques
0 18

KNOW YOURSELF
Learn to accept failure. The Secret of Chinese Happiness
Not finding yourself, not knowing your destiny, not
0 93

KNOW YOURSELF
Bad news: what they do to us
Shocking reports are everywhere – on the TV screen
0 69

KNOW YOURSELF
Boycott – a form of couple violence?
Ivan understood that he was guilty of something, but
0 50

KNOW YOURSELF
9 rules of true liars
Unfortunately, we do not always understand when we
0 81
You may also like
What happens if you stop desperately seeking love
1) you will be less nervous Agree, dating is tiring –
04
3 stages of a relationship every couple goes through
How many stages does a relationship go through?
03
http://www.psychologies.ru/articles/izmenite-rech-izmenitsya-jizn/
http://www.psychologies.ru/articles/izmenite-rech-izmenitsya-jizn/
04
“Sorry for the voice”: 7 rules of digital etiquette
Hi, my name is Julia and I hate voice messages, at
03
“We could not tell the eldest son that his brother had cancer”
How Lesha got sick In the fall of 2016, my youngest
05
Why are we afraid to quit smoking?
“When the patient says to me:“ I am not yet ripe to
05
A simple technique to make a decision and take action
Long-term exposure to the brain of cortisol reduces
05
More sex – higher salary?
We are used to thinking of our careers and personal
08
This website uses cookies to improve your experience. We'll assume you're ok with this, but you can opt-out if you wish. Cookie settingsACCEPT
Privacy & Cookies Policy