Are we all a little foolish?

There is a “fool”, to whom it is customary to treat condescendingly, a “round fool” that causes irritation, and a “moron” who considers himself better than everyone for whom others practically do not exist. He skips the line at the cashier, in a crowded bus hurrying to take the only free seat, not paying attention to a woman with a small child or an old man who can hardly stand on his feet. We have to put up with his existence, with his demands, leaps and bounds, and pretend that everything he says does not cause indignation. In this sense, he is really terrible.

Every day, everyone witnesses nonsense, hears or reads about them. At the same time, we consider ourselves fair judges. But if you think about it, we all do stupid things from time to time, despite the fact that we really would like to be reasonable.

Even the most outstanding minds are sometimes not spared from the stupidity that manifests itself in a lack of empathy.

“Adolescence and some others can temporarily turn us into fools. But the real moron is the one who stays with him for life, ”says Aaron James, professor of philosophy at the University of California.

Even the most outstanding minds are sometimes not spared from the stupidity that manifests itself in a lack of empathy. Jean-Jacques Rousseau, author of the famous pedagogical treatise “Emile, or On Education”, abandoned all his children to their fate. Nobel Prize-winning writer Knut Hamsun sympathized with Nazism.

“The stupidity of stupidity is different,” notes Maria Falikman, Doctor of Psychology. “On the one hand, everyone has had to make bad decisions, such as chasing immediate rewards instead of delayed ones, or two hares instead of one. On the other hand, there are many great discoveries that contemporaries considered nothing other than stupidity or ignorance. Sometimes such “ignorance” turns out to be the basis of being open-ended, the ability to see the situation differently from what the specialists are used to seeing. “

Errors in judgment are universal: at one point or another, they mislead us all. Psychologist Serge Ciccotti uses the term “cognitive failure”. The most common of these is obsession with negative attitudes. This is a real “stupidity radar”, which makes us show more interest in the negative aspects of life, rather than the positive, and more likely to pay attention to failure, rather than success. “This is what makes it easier for us to identify a jerk than a genius,” notes the psychologist.

Such negative attitudes form a slight paranoia: “If I don’t find the item I want, it’s because someone moved it. When we are driving in a car and another driver overtakes us at breakneck speed, we immediately decide that a crazy reckless driver is driving – it never occurs to us that he is taking his wife or child to the hospital. If an employee does not deliver a project on time, then his boss immediately tells himself that he is lazy, and that he is simply overloaded with work. “

The constant need to find an explanation for everything and conjecture only intensifies this failure. 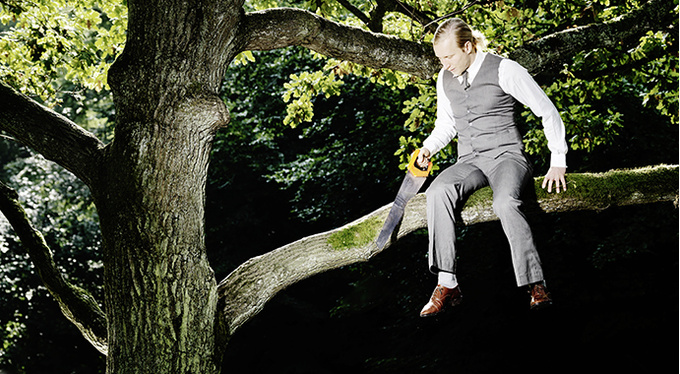 In most cases, we poorly or little analyze the situation before starting to act: because of laziness of mind, we use “scripts” – automatically triggered behavioral habits. The most famous script is that we automatically ask a crying person: “Are you all right?” – although the answer is obvious.

There is also a stupid automatism that pushes us to search for a lost object in those places where we have already looked for it. “Having exhausted all the known possibilities, we cannot imagine that the lost thing is in another place,” says Serge Ciccotti. “Therefore, we tell ourselves that we looked badly, and again we start looking for everything in the same place.” And, oddly enough, sometimes we find …

When there are several of us, we become even more stupid than alone

The theme of the general propensity to do stupid acts is also explored in the works of the 2002 Nobel Prize in Economics Daniel Kahneman and his colleague Amos Tversky. We use two different systems for thinking, operating at two different speeds. System # 1 resembles popular TV programs in which you need to quickly answer a question posed. This system is fast, intuitive and emotionally driven. Its task is to find a solution as quickly as possible. System # 2 works much more targeted and accurate, it includes enhanced control and close relationship with mental activity.

But it takes extra effort, so we prefer System # 1, which is about emotions and opens the door wide to prejudice and all sorts of errors in judgment and judgment. Alas, even high intelligence does not protect against errors of this kind! Apple founder and genius inventor Steve Jobs died of pancreatic cancer, which is often successfully operated on, because he chose to be treated with acupuncture, herbal medicine, juice therapy and fasting and thus wasted precious time.

“Who should be considered fools?” This question was asked in the 1950s by the psychologist and expert in the study of thinking, Rene Zazzo. He offered psychologists, psychiatrists and doctors a list of 120 names (which included all of them, including Rene Zazzo himself) and asked them to mark in it with a cross those whom they considered fools.

“There was not a single person without a cross opposite his surname. So, each of us is a fool for someone, ”he commented.

The winner in this “competition” was a big leader, a good clinician, whose intelligence quotient (IQ) was at least 120 points, but he was completely devoid of a sense of humor. He did not really know how to communicate with people, did not differ in sensitivity and did not notice that he offended and humiliated others.

The team does not help

When there are several of us, we become even more stupid than alone. This sad reality was discovered in the 1950s by the psychologist Solomon Ash. It is enough for the ridiculous and false idea to be supported by the majority, and many new followers will join it. For reasons of conformism, we are ready to give up not only beliefs, but even our perception of reality.

A little later, Soviet psychologists confirmed this by setting the following experiment1: a group of young people was shown two pyramids, black and white. Several of them were asked in advance by the researchers to claim that they were both white. Those who remained in the minority agreed with the majority. “If seven people say yes, then it’s hard for the eighth person to say no,” explained one participant.

But it’s not just deceit: Observational evidence from medical imaging suggests that the brain is deluding itself in order for us to join the majority.

Those who think alone about a project offer twice as many ideas as when they think in a team – this was shown by experiments conducted in 1993 by Paul Paulus and Mary Dzindole.

Nowadays, stupidity is most evident in work, says Jean Cottreau. Someone pretends to be a fool in order to flatter management and thus achieve a promotion: bosses like to surround themselves with even more stupid people than themselves in order to shine against their background. Nonetheless, stupidity is often a prerequisite for unleashing intellectual and creative potential, says the philosopher Maurizio Ferraris, adding: “… If avoided.”

Protect yourself from your own stupidity

We learn from mistakes, and it’s natural to make them. But some of them can be avoided so as not to beat yourself up later. Here is what psychologist Maria Falikman suggests for this:

KNOW YOURSELF
What to do if you cheated on your partner, but do not want to leave
Hide or confess? This is usually the very first question
0 18

KNOW YOURSELF
Four exercises to talk to your partner about sex
Some partners do not talk during intimacy, do not discuss
0 20

KNOW YOURSELF
Light at the end of the tunnel: we establish contact with ourselves in self-isolation
The coronavirus has changed our lives –
0 56

KNOW YOURSELF
love of pets heals stress
Through the mouth of a baby: scientific findings matched
0 19

KNOW YOURSELF
Wicked Words: How to Protect Your Body from Heartache
Igor came to the osteopath’s appointment in despair.
0 16

KNOW YOURSELF
“Do not interfere with your child’s creation!”
Psychologies: Is Every Child Talented? Elena Makarova
0 32
You may also like
What happens if you stop desperately seeking love
1) you will be less nervous Agree, dating is tiring –
04
3 stages of a relationship every couple goes through
How many stages does a relationship go through?
03
http://www.psychologies.ru/articles/izmenite-rech-izmenitsya-jizn/
http://www.psychologies.ru/articles/izmenite-rech-izmenitsya-jizn/
04
“Sorry for the voice”: 7 rules of digital etiquette
Hi, my name is Julia and I hate voice messages, at
03
“We could not tell the eldest son that his brother had cancer”
How Lesha got sick In the fall of 2016, my youngest
04
Why are we afraid to quit smoking?
“When the patient says to me:“ I am not yet ripe to
05
A simple technique to make a decision and take action
Long-term exposure to the brain of cortisol reduces
05
More sex – higher salary?
We are used to thinking of our careers and personal
08
This website uses cookies to improve your experience. We'll assume you're ok with this, but you can opt-out if you wish. Cookie settingsACCEPT
Privacy & Cookies Policy